It is time to have the kids explore the mountain.  One likes to decode, the other one needs help in multiplication, and the younger one needs to remember a clue from the book I read to her. What better way to get them moving out and about than a scavenger hunt!

The idea was to write four different clues. The first clue, both boys could figure it out.  This idea came from a childhood of mine, “The Secret Three”.  The boys had to place the secret note in front of a mirror to read it.  The second clue gave one a chance to decipher a simple code as he really enjoys doing them. Clue #2 had to do with assigning numbers to each letter of the alphabet.  It eventually led them to their favorite place to go sledding.

The next clue needed to help my other son with his multiplication. In order to do this, Clue #3 had to do with numbers assigned to letters, but those numbers were products that needed to be calculated through multiplication.  The answer led them to the next clue, which was where we had our fairy garden outside.

The younger one needed to feel she was able to help out by remembering an important part of a book I read to her. It also helped her with rhyming words. 🙂  The answer to the next clue had to do with finding it in a secret room in the house and eventually being led to the prize.  It was a lot of fun and took about 30 minutes for them to get the prize, cookies and hot chocolate! Yum! Here are pictures of each clue: 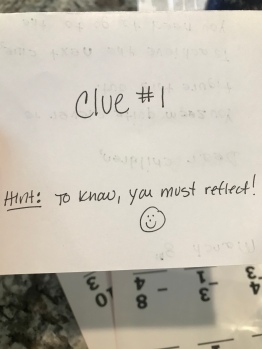 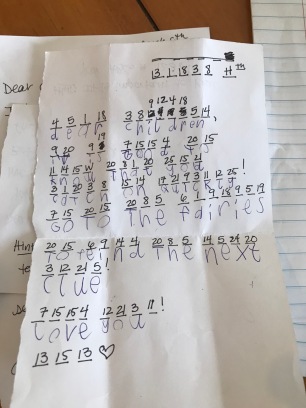 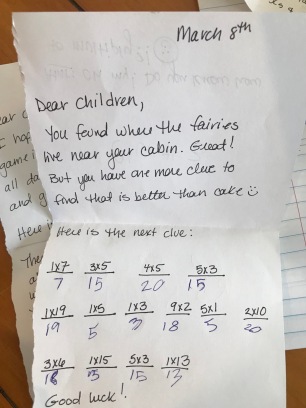 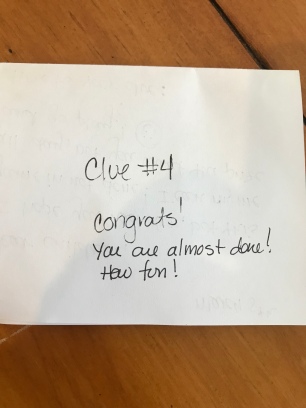 Something to Think About:

There is a new excitement to teach children how to code on the computer. What I feel is a great introduction though, is to go back to old school secret codes and scavenger hunts. The kids really need to get intrigued by wanting to decipher something and it builds on their critical thinking. By getting them started to learn how to decipher different types of codes and clues, it really gets them to understand how symbols and numbers can be associated to different commands when they get to using code on the computer.  This activity also gets my kids to go outside and explore the mountain, so this also ties into the importance of being in Nature. I plan to do more of this with them in the future!

The one thing I would do differently is to give them each a different clue to take them on their own scavenger hunt and to color code them to help them keep track. There was a time when one was working on the code while the others played nearby.  It worked, but I really wanted them to all be engaged at the same time.

The important thing is to get them excited about math and using it outside, especially if it involves cookies and hot chocolate as the end all of prizes! Enjoy! 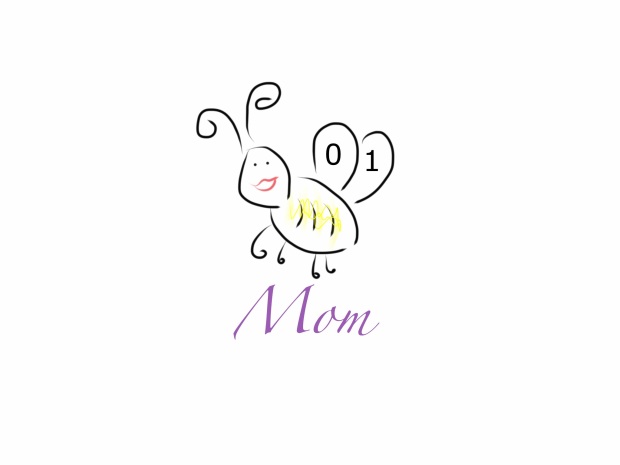