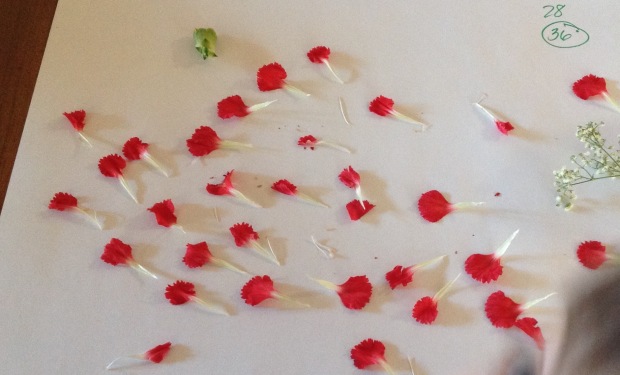 It was a very hot day of over 100 degrees outside and we needed something to do in the house.  After having carnations left over from a bouquet, I made the decision to use them to teach my children and my nephew about the parts of the flowers and counting.  For this, I gave each child a carnation, a piece of paper, tape, and glue sticks.

So the children began taking a part the flower petals and spreading them out.  All I have to say is how beautiful everything smelled in the room! As you look at the photos, some of them had 37 petals, while another had 36 petals.  The numbers were all within range of each other.  It was really interesting for them to work carefully in pulling apart the carnation flower from the stem and then finding out how difficult it was to pull the stamen and stigma apart from each other.

For the number of stamen and comparing this to the numbers of petals, I will have you figure this out with your own children at home.  This idea came from my time taking photos of the flowers on the mountain close to us.  Sometimes the comparison was equal, while other times it was double or half of the other.  The idea for doing this and observing is to acknowledge that there is a relationship here.

This activity took about 10-20 minutes to do.  Most of them could do this on their own, but sometimes needed help in taping, or glueing this onto the paper.  We did let the petals dry and we put the rest of the flowers into the compost.

Something To Think About:

On the photo above, you see the number 28 and then the number 36.  For this, I asked one of the them to guess the number of petals he had on his paper.  He guessed 28 and then we counted them together to get 36.  So his estimate was not too far off from what the actual count was.  Estimating is a wonderful skill to have, so even doing this is a great example of how to have your child practice estimation. When you go get blueberries, or raisins in a box, have the child estimate the number and then count them and eat them!

Remember, doing mathematics at home does not have to be fancy.  You can go outside and look at the flowers and count petals.  If you have cut flowers at home and would like to get some more use out of them, think about doing this activity.  You do not even need to have paper and glue handy.  Just have them take a part the flower and start counting.  🙂  Take a closer look around you and start counting and comparing.  🙂 Below are more examples of the work the children did that day! 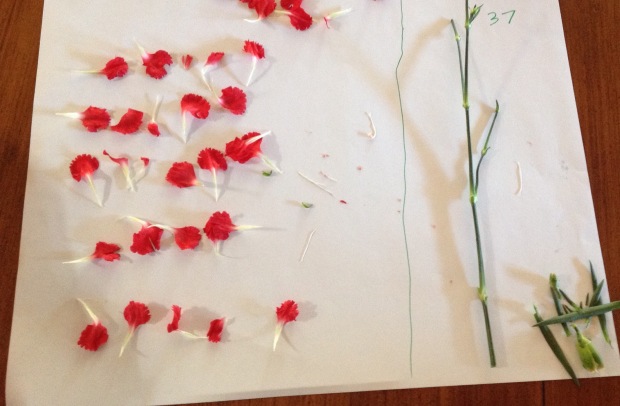